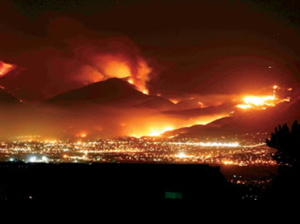 Five years ago my family and I were awakened early in the morning and forced to evacuate our home due to raging wildfires burning out of control near our home in Southern California and fanned by winds gusting to over 100 miles per hour (as shown right).  Unlike many of our neighbors, we had time to gather a few things before we escaped.  We left seriously doubting that we would return to find our home still standing.

After nearly a week we were allowed back into our neighborhood.  Fortunately, our home survived.  We suffered smoke damage and some damage to trees, but few other problems of note.  Many of our friends and neighbors were not nearly so lucky (see below). Just within our church community, 70 families lost their homes.  We live with “fire season” every year.  But the problems and the risks have grown consistently over the 17 years we have lived in San Diego and they will continue to grow, largely on account of climate change. 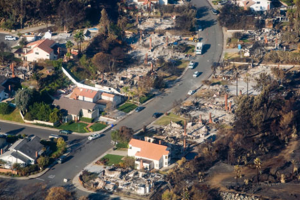 According to nearly all working scientists in the field and the various organizations representing America’s best scientists, climate change is a fact. It is very likely caused by the emission of greenhouse gases from human activities and poses significant risks for a range of human and natural systems. As these emissions continue to increase, further change and greater risks will ensue.  These risks include rising temperatures, extreme weather, and the problems caused or (more typically) exacerbated by them.  A helpful summary of the science of climate change is provided by the following video.

Without belaboring what is remarkably clear, temperatures are rising significantly.

And sea level is rising and rising faster.

With events like Hurricane Sandy crashing onto the East Coast recently becoming more and more common, it is exceedingly difficult to ignore the increased and intensifying storms, droughts, cold snaps, heat waves, wildfires and disease that inevitably follow from climate change and which are causing devastating damage and disaster-related losses, according to organizations like the National Oceanic and Atmospheric Administration and the Intergovernmental Panel on Climate Change.  It also means more agriculture-related problems and more variability in weather patterns.

If you don’t want to believe scientists directly, then believe the highly profit-motivated insurance industry, which has become the first major business sector to acknowledge the effects of climate change and to seek to deal with that risk in a systematic fashion.  Just two weeks before Sandy slammed onto the Jersey shore, German reinsurance giant Munich Re issued a report entitled Severe Weather in North America, in which it linked the risks of severe weather events to human-caused, or anthropogenic, climate change:  “In the long-term, anthropogenic climate change is believed to be a significant loss driver. […] It particularly affects formation of heatwaves, droughts, thunderstorms and — in the long run — tropical cyclone intensity.” Allianz actively lobbies for worldwide, binding carbon emission targets and has designed various insurance products to deal with climate change risk, such as catastrophe bonds and micro-insurance. Swiss Re also has a product line that is explicitly geared toward climate-change risks.

Or perhaps you’ll be influenced by the United States Navy, which is actively preparing for an ice-free Arctic Ocean.  Indeed, a major study commissioned by the Pentagon asserts that climate change is a greater threat to national security than terrorism. Even oil companies (see here, for example) acknowledge the facts of climate change and its human causes.

There is a dedicated group of climate change “skeptics” who insist either that climate change is a myth or that its risks are overstated.  Since causation is such a difficult matter to ascertain to everyone’s satisfaction (and especially to the asserted satisfaction of those whose financial status is threatened by climate change), there will be some kind of debate about this for the foreseeable future.  But no serious climate scientist believes that sea level will rise less than a meter this century unless we get off fossil fuels with great haste.  Many forecasts are much grimmer.  At least 20 port cities will be seriously exposed to coastal flooding risks in the coming decades including Mumbai, Calcutta, Ho Chi Minh City, Shanghai, Bangkok, Tokyo, Miami, Alexandria, and New York (as Hurricane Sandy demonstrated).

But even if the science were in dispute, when an activity raises threats of harm to human health or the environment, precautionary measures should be taken even if some cause and effect relationships are not fully established. In this context the proponent of a threatening activity, rather than the public, should bear the burden of persuasion.  If they cannot do so — by establishing that climate change is not a substantive risk — then we should act as if climate change is a major risk to our lives and health. This approach is particularly appropriate, as Nassim Taleb points out, because the extent of the threat and the risks are so high.  As Taleb explains, we should readily use a headache pill if it is deemed effective at a 95 percent confidence level but assiduously avoid such a pill if it is established that it is “not lethal” at a 95 percent confidence level.

The results of the presidential election and the impact of Hurricane Sandy suggest that there might finally be some traction toward dealing with climate change.  After a campaign devoid of its consideration, climate change was finally brought up by New York City Mayor Michael Bloomberg in his surprising last-minute endorsement of President Obama in the wake of Sandy. The President himself returned the issue to public light by speaking of it in his acceptance speech on election night:

“We want our children to live in an America that isn’t burdened by debt, that isn’t weakened by inequality, that isn’t threatened by the destructive power of a warming planet.”

Yet, to this point, little has been done.  Neither New York City nor New Jersey, which took the brunt of Hurricane Sandy’s force, have made climate change response a serious priority, perhaps because doing so would create further tax burdens on a population already economically stretched.  More cynically, while storm mitigation is largely a state and local expense, disaster clean-up garners major federal dollars.  Irrespective of the reasons, much needs to be done and almost nothing has been done.

But is there an investment play here?

The reality of climate change doesn’t mean that there’s a trade to be made. Jeremy Grantham (see here) addresses the issue directly: Global warming will be the most important investment issue for the foreseeable future. But how to make money around this issue in the next few years is not yet clear to me.”  I hesitate to disagree with Grantham because of the great respect I have for him, but disagree I do.

With the possible exception of the inverting demographic pyramid, I expect climate change to be the dominant investment challenge and opportunity of our time. But I don’t expect it to play out quickly. For most traders, an actionable item is one that can and should be undertaken right now and is expected to pay off essentially right away (not that there’s anything wrong with that).  But no matter how often I point out that lunch tomorrow is not a long-range plan, I don’t seem to get heard all that often on this point.  Yet I will not be deterred.  Today I offer an action item that will almost surely pay off in the longer term for those with the necessary patience based upon any reasonable interpretation of the available data.  The climate is changing and those changes will have to be dealt with sooner or later.

The denialists do not trouble me in the least.  As Bruce Chadwick puts it, “if your investment horizon is long enough and your position sizing is appropriate, you simply don’t argue with idiocy, you bet against it.”

Investment opportunities in this area fall into two general categories.  Climate mitigation focuses on reducing greenhouse gas emissions while climate change adaptation refers to actions taken to address the risks and opportunities associated with the physical effects of climate change such as changes to temperature, rainfall and ecosystems.

I remain unconvinced about the investment opportunities available with respect to mitigation. Since entrenched energy interests have a strong economic incentive to delay governmental initiatives towards climate mitigation, since climate denialists are likely to oppose such initiatives, and since it remains decidedly unclear which approaches will succeed (even assuming the “correct” approach(es) currently exist), Grantham’s uncertainty is well placed in this regard.  From an investment perspective, we can avoid arguing about the causes of climate change — which are fraught with political peril despite science that is clear — and simply put our money to work in companies that deal with the consequences of climate change while avoiding those entities and regions with the most to lose.

Thus the better investment opportunities exist in climate change adaptation.  Adaptation efforts include improved infrastructure design (Sandy clearly demonstrated the fragility of our energy infrastructure), more sustainable management of water and other natural resources, modified agricultural practices, and improved emergency responses to storms, floods, fires and heat waves.  Infrastructural improvements include sea-walls, dykes, tidal barriers, and detached breakwaters. But since these improvements may have unintended and damaging side effects, for example by displacing erosion and sedimentation, we might also consider “softer” accommodation options that involve restoring dunes or creating or restoring coastal wetlands, or continuing with indigenous approaches such as afforestation.

Other accommodation options include warning systems for extreme weather events as well as longer-term measures such as improving drainage systems by increasing pump capacity or using wider pipes. Of particular interest ought to be food technologies that are resistant to heat, drought and flooding.  Water needs provide opportunities in adaptation strategies for water conservation, storm water control and capture, resilience to water quality degradation, preparation for extreme weather events and diversification of water supply options.

Harsher and more wide-spread droughts will lead to a strain on communities and farmers that need fresh water. At the same time, rising sea levels will affect coastal regions, potentially leading to an increase of salt in ground water. So-called desalination technology has been a non-starter to this point; venture capitalists may want to re-think that. Other water recycling approaches are also promising. Further opportunities exist with respect to innovations in dealing with infectious diseases and pest control, weather forecasting technologies and more efficient irrigation systems.

Because the facts (and the science) are inexorable, society is going to have to adapt to higher temperatures and a rising sea level.  Obviously, it’s much cheaper to deal with climate change before a crisis hits than after a city has been flooded. But there is no reason to believe or expect that we will have the public policy sense to do so.  Moreover, green-energy technologies are still too speculative for the type of call I’m making here. The obvious investment priority is in adaptation technologies that will prepare and help us to deal with effects of climate change.

It is a highly speculative play.  It is a very long-term play.  But it is the right play.  Our atmosphere is getting warmer and that has inevitable consequences.  It is the most important hot action item of our time.