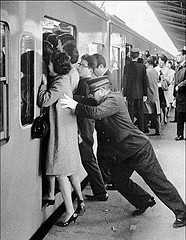 It is axiomatic in the investment world that as an approach, sector or asset class becomes more popular, it suffers from both falling expected returns and rising correlations.  In other words, good trades get crowded and their advantages tend to disappear.  This crowding happens because success begets copycats as investors chase what has been hot.  Our behavioral biases all but demand it.

Those of us who have been around long enough have seen this ongoing give-and-take happen time and time again.  Whether we’re talking about large-cap Dow stocks in the 60s (the “Nifty Fifty”), gold during the 70s, Japanese stocks in the 80s, U.S. stocks (especially techs) in the 90s, or more recently (for example), gold, commodities, bonds, China, private equity and Apple, to name but a few, the trend is your friend right up and until it isn’t anymore. Let’s take a quick look at one of these examples, currently in the news, and examine the consequences of failing to recognize the crowding phenomenon and to adapt to the consequences thereof in a very specific context.

In 1999, various interests argued that California retirees had not been benefiting sufficiently from the roaring stock market (see below).

These interests were successful at getting legislation (SB 400) passed so as to provide new and much more generous pension calculation formulae to be applied to both past and future service for certain governmental employees (particularly those involved in public safety).  The increase in liabilities for these benefits was advanced as having no immediate cost to employers. The funding gap was to be closed by “excess” assets that had accumulated on account of investment returns that had significantly exceeded targets during the 1990s, and which were thus not retained “for a rainy day.”  Times were good, providing “free” benefits was attractively politically and legislative approval was quickly achieved (think recency bias, overconfidence bias and political opportunism — Roger Lowenstein’s excellent While America Aged lays out the basic issues clearly, although it isn’t about CalPERS specifically).

Two years later, additional legislation (AB 616) was advanced so as widen the scope of increased retirement benefits.  Supporters argued that improving the retirement formulae more broadly was necessary to attract and retain a qualified and experienced labor force in public service at a time when the labor market in California had become more competitive.  They carried the day.

Unfortunately, these increased retirement benefits – and their ballooning costs – took effect at about the time the tech bubble burst.  These enormous costs had to be bourne during a decade of secular bear market conditions and severe economic downturns, during which state and local governments were forced dramatically to reduce budgets and services.  When this “rainy day” came, investment returns did not keep pace with costs and the previous “excess” reserves were already being used to fund the promised additional benefits.

It should come as no surprise to anyone that these actions have been the source of a great deal of political wrangling since.  Last September, Gov. Jerry Brown signed legislation lowering benefit levels for new employees.  CalPERS (the California pension giant) Chief Actuary Alan Milligan recently published a report earlier this year suggesting that various state employee and school pension funds are only 62-68 percent funded 10 years out and only 79-86 percent funded 30 years out. Mr. Milligan then proposed — and earlier this month CalPERS approved — raising state employer contributions to the pension fund by 50 percent over the next six years to return to full funding.

In retrospect, it is clear that the system created by SB 400 and later enhanced by AB 616 was unsustainable, largely on account of unrealistic investment return projections, especially during a secular bear market, and without the benefits of reserves retained from the previous secular bull. CalPERS has underperformed its return objectives in the aggregate (originally 8.25 percent under SB 400; amended to 7.75 percent in 2003; and amended further to the current 7.5 percent rate in June of 2012) since 2000 and is prohibited by law (and politics) from making quick adjustments to changing circumstances.  As a consequence, CalPERS remains in difficult straits, even though the additional funding provided by members (outlined above), should help dramatically (while also taking a huge bite out of government budgets).

Even when it is relatively clear that overcrowding in an asset class, sector or approach is reality, deciding what to do about it can be exceedingly problematic.  Obviously, hanging on too long can result in serious damage.  However, many have also been crushed by exiting good “trades” too soon.

Being nimble is thus crucial, of course.  CalPERS has had particular difficulty in that it is prevented from being nimble on account of size (over $250 billion in assets under management), law and politics. If you have the ability and the skill to be extremely nimble, you can better afford the risk of hanging on too long to a good trade.  If, however, for whatever reason, you can’t be nimble, it’s better to get out early.  There are few things worse in the investment world than a bad trade that can’t be escaped.

3 thoughts on “The Consequences of Crowding”