Josh Brown has an interesting piece up this morning in which he outlines the dramatic shift within the investment industry from commission-based (suitability standard) selling to fee-based (fiduciary standard) management and uses that data as an explanation for the tremendous underlying bid seen in the equity markets of late. “It’s amazing that almost no one has connected these dots before.”

It’s not that I entirely disagree with Josh here (and we don’t disagree often). He is on to something noteworthy. But it’s a story I’ve heard before. Those dots have been connected, with a less-than-stellar outcome.

Back in late 1999, I remember watching a CNBC interview with an old stock-jock (the kind that would be called “venerable”). He was said to be in his 80s and a long-time market-mover. I have tried in vain to remember his name and/or to find a video clip of the appearance. But I do remember what he said.

This geriatric money manager said that his business and personal portfolios were 100 percent stocks and were heavily weighting toward tech. He further claimed that in the then-current environment, a portfolio with a 100 percent equity allocation was safer for even people his age than more traditional investing choices because consistent and regular market in-flows from 401(k) contributions and the like, together with general market action (almost everyone was buying tech stocks as fast as their cash and margin allowed) provided constant market support — in other words, a relentless bid.  Accordingly, in his view, it was almost impossible for the equity markets to take a major hit (at least for long). 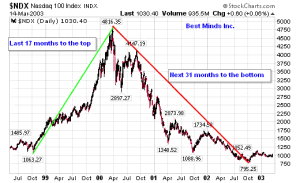 We all remember how that prediction turned out (look right). My point is not to deny the underlying bid or to suggest that it can’t or even won’t continue (I remain generally constructive). The current consensus is heavily biased towards equities, reflecting recency bias as usual, but also providing a bid. My point is that the bid is relentless for now. It will last only until it doesn’t. Josh’s analysis relates to fee-based managers no longer having a financial incentive to churn accounts — they get paid for managing, not for trading. Thus his conclusion is proffered in the form of a question: “in the absence of a transactional commission incentive for the advisor to trade, why else would he?” Had the question been on the order of Why else should s/he?, I might have agreed, at least in large measure. However, that was not the question posed.

So why (else) would fee-based managers trade (read “sell”)?

Moreover, there is precious little evidence that fee-based clients are somehow less demanding (read “outraged and unreasonable”) if (and inevitably when) their portfolios do not perform as well as they’d like. Why am I paying you to lose money? If I’d been with X I would have avoided this mess!

When the market turns over — whether later today, next week, next year or whenever, it inevitably will — folks will start heading for the exits. And if, as, and when the market action becomes a downturn, a correction and then a cyclical bear market, of whatever length, the relentless bid will fade and then disappear…until it comes back…whenever that is….

Update: Josh emailed to emphasize that he wrote “a description, not a prediction.” He’s right about that. My point was that anyone looking to trade on his hypothesis is on a dangerous road and one that has been travelled before. Josh’s subsequent clarifying (and excellent) follow-up is here.

4 thoughts on “The Relentless (for now) Bid”