It seems to me, after a good deal of thought, reflection and research, that we have so much difficulty dealing with behavioral and cognitive bias in large measure because we build our belief structures precisely backwards. There’s nothing revelatory in that conclusion, obviously, because it is exactly what confirmation bias is all about. We like to think that we make (at least relatively) objective decisions based upon the best available evidence. But the truth is that we are ideological through-and-through and thus tend to make our “decisions” first — based upon our pre-conceived notions — and then backfill to add some supportive reasoning (which need not be very good to be seen as convincing).

I have been working on an infographic to try to illustrate the issue* and have come up with the following. 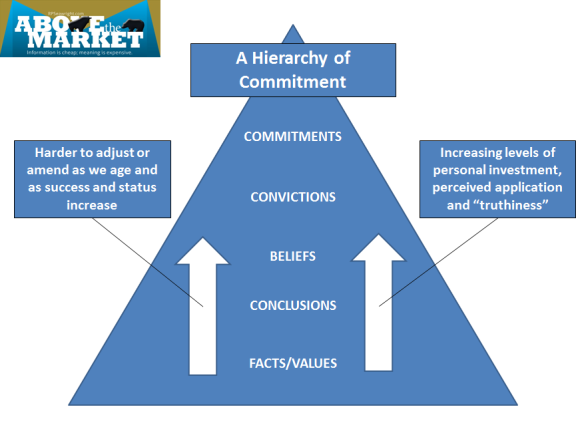 The goal should be to build from the ground up — beginning with facts, working to conclusions and so on. Beliefs are interpretations of one’s conclusions about the facts. If more fervently held, they rise to the level of conviction and perhaps to the highest pyramid level, whereby one makes a major commitment to a particular cause, approach or ideology. These commitments are the things by which we tend to be defined.

In the real world, we hold our facts relatively loosely and tighten up as we move higher on the pyramid. We all like to be right, but we find it easier to be found wrong on the facts than to be wrong about things in which we have important personal and emotion investments. In a better world, we’d hold onto the facts tightly, as they provide the foundation upon which the rest should be built and they offer our best chance at objectivity. Like scientists, we’d be prepared to alter our thinking with each new fact. However, since facts without interpretation are useless, values need to be mixed in to build an interpretive framework and to make interpretive choices. That said, our values aren’t always factually based or even consciously chosen. They can readily cause us to misperceive the facts.

Conversely, we should hold our beliefs more lightly and try to keep them always subject to the facts and our values. Unfortunately, we readily confuse adjusting our beliefs and convictions in light of new or better evidence with being wishy-washy. For example, we hate it when political candidates flip-flop. We want strong leaders with the convictions and commitments to stand up for truth. Thus much of what counts as political discourse during election campaigns is simply each candidate trying to cast the other as a flip-flopper.

Life experience also conspires to make it more difficult to adjust or amend our positions as we move up the pyramid. The older we get, the more authority we acquire, the more success we achieve, the more prominent we become, the more admired we are, and the more popularity we are bestowed, the harder it is for us to see our mistakes and act accordingly. And since greater conviction leads to greater perceived confidence, certainty and thus credibility and success, it’s easy to continue to fool ourselves, especially when and as things are going well.

There’s a famous expression to the effect that it’s hard to reason someone out of a position that wasn’t reasoned into, and there’s truth in it. It’s hard enough to influence or help alter a person’s beliefs — about religion, politics or even the Yankees’ relative evilness — much less someone’s life commitments (which can be made with respect to religion, politics or almost anything else). But if we’re to have a chance to make better, more reality-based decisions (about investing and everything else), we’re going to have to try and to begin with ourselves.

* I want to be careful to note that this is a working hypothesis only. I can’t establish it from the data, even though I think it is entirely consistent with the available information (note, for example, research into motivated reasoning, the Semmelweis reflex and the backfire effect). It is also consistent with my experience. Please let me know if and how you look at things differently and the basis for why you do.

2 thoughts on “A Commitment to Truth”