Airport men’s rooms are among the most disgusting places on planet Earth. For the benefit of squeamish readers, I won’t relay any of the horrors I’ve seen, but nobody who has experience in this area will deny its reality. The problem begins with the empirical fact that males generally are not very tidy around the toilet. And if the restroom is of the public variety, look out, especially when it concerns our “aim.”

In Seinfeld’s “The Butter Shave” episode, Kramer sees Jerry working on his shoe and asks what he’s doing. Jerry replies, “Oh, I’m taking this lace out. It came undone and touched the floor of a men’s room. That’s the end of that.”

With people rushing to and from flights, airport toilets are especially at risk. An ingenious economist named Aad Kieboom, who worked for Schiphol International Airport in Amsterdam, provided a clever mitigation technique for the problem in the 1990s based upon an idea from the airport’s cleaning department manager. The idea was to etch an image of a fly onto the bowls of airport urinals.

The rationale was simple. If you give males a target, most of them will aim for it. “Guys are simple-minded and love to play with their urine stream, so you put something in the toilet bowl and they’ll aim at that,” explained Klaus Reichardt, inventor of the waterless urinal. Parents of boys, who have seen target practice all too often and in a wide variety of settings, can only nod in agreement.

As a result, “spillage” (I’m surprised that Seinfeld never did a “spillage” episode) declined significantly in the airport and a business was born. The “Tinkle Target” idea is considerably older than Kieboom’s iteration and was previously American, although the Victorians seem to have been first. They used a bee design at the bottom of chamber pots to serve as both a target and a play on words. Apis in Latin means bee so they had, quite literally, a piss pot.

The urinal target is Nobel laureate Richard Thaler’s favorite nudge, which Thaler and Harvard’s Cass Sunstein define as a choice “that alters people’s behavior in a predictable way without forbidding any options or significantly changing their economic incentives.” I have seen this technique used many times, including just last week at a high-end winery restaurant (see below). 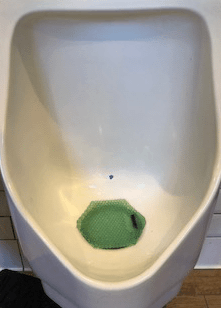 A fly isn’t required, of course. The possibilities are endless. Some spiffier places today use a golf flag. Images of bankers began appearing in Icelandic urinals during the Great Financial Crisis, shortly after the country’s three main commercial banks collapsed. The University of Louisville uses the emblem of arch-rival University of Kentucky as its urinal target in some changing rooms.

The moral of this story is obvious. We all do better when we have something to aim at. That’s why proper benchmarking is so important. In the investment world, it means a standard or measure that can be used to analyze the allocation, risk, and return of a given portfolio. Most often it’s an index or a combination of indexes (narrow, broad, or even custom), but it can also be a specific monetary target, a goal, or some set of goals.

Whatever you may decide is the best benchmark or set of benchmarks to use, be sure you have them in place. A clear benchmark is the best means we have for determining how good one’s investment “aim” is.