By this point, every investment professional has at least a passing knowledge of behavioral finance and its lead actor, confirmation bias, whereby we see what we want to see, accept these desires as truth, and act accordingly. What we “find” is often little more than Jesus on toast – what we wanted or expected to find all along. It explains why the average man claims to have slept with 14 women while the average woman says she has slept with seven men.

We like to think that we see the world as it truly is. The difficult and dangerous reality is that we tend to see the world as we truly are. As C.S. Lewis writes in The Magician’s Nephew, a children’s book that is much more than that, “What you see and what you hear depends a great deal on where you are standing. It also depends on what sort of person you are.” For all of us, far too often, believing is seeing. 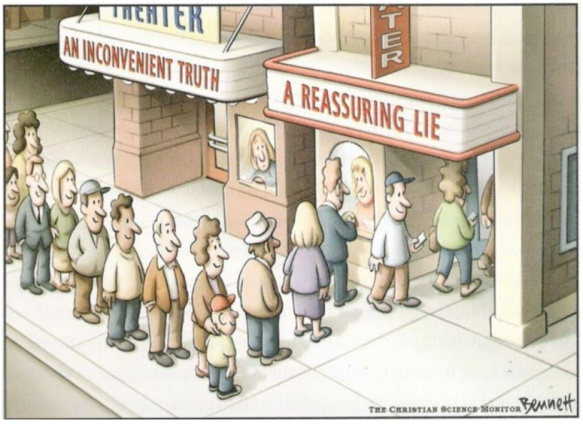 Once we reach a conclusion, we aren’t likely to change our minds, even when new information shows our initial belief is likely wrong and clinging to that belief has real costs. “When we know something we stop thinking about it, don’t we?” a character in the Miriam Toews novel, Women Talking, recognizes, as she tries to develop the ability and willingness to change her mind. And once we start seeing confirmation bias, it’s hard not to see it everywhere.

Simon and Garfunkel got the concept by 1970, well before Tversky and Kahneman, when Simon wrote and they first sang The Boxer. “Still the man hears what he wants to hear and disregards the rest.”

“Responsibility” was misspelled as “responsibilty” – three times! – and it took a radio station to point out the error…after six months (the notes remain in circulation).

We don’t readily see what we don’t expect in movies, either, which provides the opportunity for fan service “Easter eggs” as well as a cottage industry of mistakes and continuity errors. For example, in Alfred Hitchcock’s classic spy thriller, North by Northwest, a boy covers his ears moments before a gunshot rings out in the Mount Rushmore cafeteria. Look for him on the right of the screen as Eve (Eva Marie Saint) threatens Roger (Cary Grant).

Or, look how number 52 passes to himself in Above the Rim.

Best player from 'Above The Rim' was #52

Steals the ball
Throws full court pass to himself
Does a 360 dunk
Blocks a dunk with 2 hands
Gets the assist pic.twitter.com/y4KiVuJxlW

When we grab a glass of what we think is apple juice, only to take a sip and discover that it’s actually ginger ale, we react with disgust, even when we love the soda. We quite naturally try to jam the facts into our pre-conceived notions and commitments or simply miscomprehend reality such that we accept a view, no matter how implausible, that sees a different (“alternative”) set of alleged facts, “facts” that are used to support what we already believe.

David O. Russell’s American Hustle began as a script by writer and producer Eric Singer entitled “American Bulls**t.” Its major theme is expressed by a stripper from the American southwest turned would-be English aristocrat, played by the great Amy Adams.

Truth is irrelevant to “get[ting] over on all these guys” because “people believe what they want to believe.”

Confirmation is common – routine. Yet it is highly desired, sought-after even. We preach to the choir and ignore the needy heathen. If you tell people what they want to hear, you can be wrong indefinitely. You can spout nonsense virtually undeterred and unchecked. You can even tell people that if they give you money, God will make them rich, and lots of people will give you money.

The Music Man, perhaps America’s greatest musical, features Harold Hill, a traveling con man who poses as a boys’ band leader who sells band instruments and uniforms to naïve Midwestern townsfolk, promising to train the members of the new band. As he has done many times before, his intention is to flee as soon as he receives the money.

Librarian Marian Paroo suspects Harold is a fraud, but holds her tongue since her moody little brother, Winthrop, is excited about the band. As Harold falls for Marian, he “gets his foot caught in the door.” In the final scene, Harold is asked to prove his legitimacy by having the band play. They’re terrible, but (of course) their parents are enraptured by their children’s “talent” and all ends well.

Parents thinking their children are far better than reality allows? That’s common, because believing is seeing. All turning out well? Not so much.