We run with herds…

…and latch on to fads, willingly – eagerly! – dispensing with good sense on the way.

To illustrate the level of cray-cray: One report at the time featured a Texas woman gripping a Cabbage Patch Kid tightly even as another shopper’s purse strap was wrapped around her throat.

We gather in packs, get in with the in-crowd…

…and self-select ourselves into affinity groups of various kinds, often to our detriment. 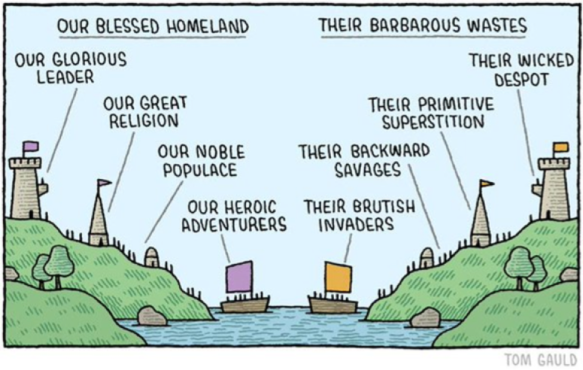 We eagerly denounce others who pick their teams and tribes over principle and even over objective truth, but are also comforted to know that our own side “has our back.” Nuance and ambiguity are not welcome in a tribal world – dogma only. No arguments – just (confrontational) assertions. Only superheroes and villains exist in a vortex of grievance. We “are innately tribal, psychologically primed to recognize in-group and out-group before the frontal cortex gets a look-in.”

We all want to stand against the tide and for the truth — to be contrarian individualists (like everyone at Warren Buffett’s annual love-in). Alas, that doesn’t happen all that often.

Research suggests that while few Americans have a consistent ideology, our partisan identity remains consistent and is very important to us. “After deciding that we are Republicans or Democrats, we start to also call ourselves conservatives or liberals, even if we have little understanding of what those terms mean.” All of which explains why conservatives are now called RINOs (Republicans In Name Only) for expressing conventionally conservative views the current Republican president rejects.

We are inveterate herders. As the great Steven Stills sang (and wrote):

What a field day for the heat
A thousand people in the street
Singing songs and carrying signs
Mostly say, ‘hooray for our side’

Hooray! Everybody loves a winner. And we eagerly jump on board.