Why do men find younger women more desirable than older women? Evolutionary psychologists tell us that younger women are more likely to be fertile and healthy, and their progeny are thus more likely to arrive and survive. Accordingly, per this thinking, male preferences are driven by genetics, through the mechanism of evolution by natural selection during the Pleistocene era, to optimize the chances of their genes being preserved.

This claim has a certain plausible elegance to it. It may even be true, despite its consistency with common stereotypes. However, despite the scientific imprimatur with which it is offered, it is — nonetheless — a just-so story, without empirical evidence to support it. The interior lives of our progenitors left no fossil record. As Stephen Jay Gould recognized, linking the behavior of humans to their evolutionary past is fraught with peril, “not least because of the difficulty of disentangling culture and biology.”

On account of the narrative fallacy, we insist on plunging ahead anyway. Even scientists.

The narrative fallacy is our general inability to look at sequences of facts or events without weaving an explanation into and around them. Explanations bind facts together in our minds and memories. The fallacy part, as the semanticist Alfred Korzybski reminded us, is that “The map is not the territory.” Korzybski emphasized that symbols (“maps”) are not the things symbolized (the “territory”). “Those who rule the symbols, rule us.” 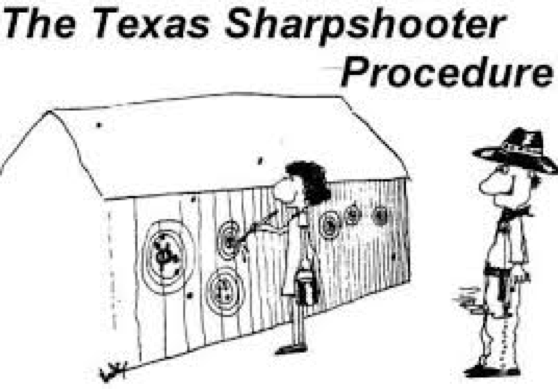 Ursula K. Le Guin’s opening line of her science fiction classic, The Left Hand of Darkness, is brilliant: “I’ll make my report as if I told a story, for I was taught as a child on my homeworld that Truth is a matter of the imagination.” Her “homeworld” is more like ours than we’d care to admit.

The story may be apocryphal, but Maria Konnikova describes the French poet Jacques Prévert improving a blind beggar’s signage and fortunes. In place of “Blind man without a pension,” Prévert flipped the sign over and wrote, “Spring is coming, but I won’t see it.”

Don Draper doesn’t close the deal with facts — he “plays a memory” (and the irony is all the richer because the story he tells is utterly fake).

With stories, we’re “easy to convince.”

We want to be entertained.

“Here we are now, entertain us.”

As his handler Fuches reminds contract killer Barry in the HBO series of the same name, the real-life William Wallace didn’t give that iconic speech we watched and remember in Braveheart. People, he said, “don’t want honest. They want entertainment.” As Fuches repeatedly insists, “I guess everyone’s a hero of their own story, right?” Series star Bill Hader notes, “They want to see the thing that they’re not.”

In this sense, we are all novelists, who always put the best “faces” on our behavior. Stories get in the way. We’re all pretenders.

Even Erasmus recognized that most Christians will learn nothing from a sermon but remember a story told by the preacher.

The artistic impulse, (in a bit of delicious irony, this idea is often falsely attributed to Mark Twain), is never to let the facts get in the way of a good story. Significantly, Lin-Manuel Miranda’s Hamilton is consistently wise to this problem in that the characters (and George Washington especially) are aware that who tells the story is crucial to how one is perceived and remembered.

Stories are a “land of make believe,” both literally and figuratively.

Released 20 years ago, Peter Weir’s brilliant film, The Truman Show, may be the work of art that best predicted the 21st century. It stars Jim Carrey as Truman Burbank, adopted and raised by a corporation inside and enclosed by a reality television show of his life, until he discovers the charade and decides to escape. A taut, dark, yet funny masterpiece whose prescience only deepens with time, Truman’s entire existence since the womb has been televised, and all the people in his life have been paid actors.

The show’s creator and director, Christof (Ed Harris), was a prophet when he proclaimed that, “We’re tired of actors giving us phony emotions … [The Truman Show] is not always Shakespeare, but it is real,” or as real as most Instagram accounts, anyway. When the film began showing in theatres, people doubted that anyone would watch Truman’s banal life. Today, few doubt that many would choose to be Truman.

As he discovers the truth about his existence, Truman fights to find an escape – through a door the looks like the sky – from those who have always controlled him and his simplified and utterly phony reality. Like Truman, we all struggle with the narratives we seem to have been given. We are all, as Devorah Goldman argues, balancing our roles as “creator and created, limited by circumstances and nature but bent on inventing ourselves and managing how we are perceived.” As Christof explained, “We accept the reality of the world with which we are presented. It’s as simple as that.”

The world to which Truman “escaped” 20 years ago was significantly different from today’s world. It isn’t altogether clear that if Truman escaped today he would see much difference between his prison and his new life.

We like to think that we are like judges, that we carefully gather and evaluate facts and data before coming to an objective and well-founded conclusion. Instead, we are much more like lawyers, grasping for any scrap of purported evidence we can exploit to support our preconceived notions and allegiances. Doing so is a common cognitive shortcut such that “truthiness” – “truth that comes from the gut” per Stephen Colbert (the video can’t be embedded; watch it here) – seems more useful than actual, verifiable fact. What really matters is that which “seems like truth – the truth we want to exist.” That’s because, as Colbert explained, “the facts can change, but my opinion will never change, no matter what the facts are.”

Reality is messy. Stories? Not so much. Stories can never be truly ordinary or they wouldn’t resonate. There needs to be narrative arc or we won’t stick around. Our lives are ordinary and we want to experience the extraordinary, to imagine being extraordinary. If characters in a story are too real, it wouldn’t be a very good story.

And we all love a good story.

1 thought on “Top Ten Behavioral Biases, Illustrated #6: The Map is Not the Territory (the Narrative Fallacy)”