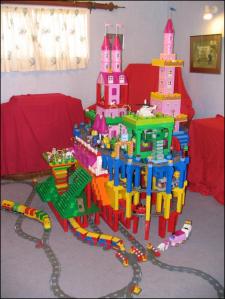 My two-year old grandson loves his Legos.  As a kid, I loved my Legos. These colorful bricks seem to call to us to create elaborate and complex structures.  They don’t invite simple, clean lines. Sure, once in a while somebody (never a kid) makes a Lego Fenway Park or something like that, but crazy and complex is the norm (not that a Lego Fenway Park isn’t a different sort of crazy). That’s why they’re so much fun.

We love complexity.  It’s why it is so hard for us to employ Occam’s Razor.  We should of course go with the simpler explanation or approach unless and until something more complex offers greater explanatory power. But we don’t.  We want to include our pet political ideas, convoluted conspiracy theories or favored market narratives.  We are ideological through-and-through, and the more complex the better.

We think that complexity offers security.  In the investment management world, complexity is often deemed necessary for both protective and marketing purposes. Complexity says, We’re doing all we can (and thus, It wasn’t my fault).  Or, What we were really after was….  Or, I’m an expert. We’re afraid that if the answer were truly simple, clients wouldn’t need or want us.  No matter how simple the proper approach, clients would always need us to protect them from themselves, of course, but we’d rather see ourselves as market gurus than as psychologists.

After the 2008-09 financial crisis, there was a lot of press about the supposed “lost decade” in the markets  But with an ongoing four-year cyclical bull market in stocks and now that 10-year returns for a standard (and exceedingly simple) 60:40 portfolio (such as VBINX) exceed 7 percent annualized, that talk has largely disappeared (even more so because the most common proposed antidotes, typically employing strategies described as complex and proprietary, such as hedge fund investments, have performed so dreadfully in comparison).

For many years, the famous card wizard Ralph Hull bewildered even professional magicians with a trick he called “The Tuned Deck.” He claimed that the deck was magically tuned so that he could “hear” which card had been selected by a volunteer asked to “pick a card, any card.”  No matter how many times Hull did the trick, even for expert audiences, nobody figured it out.  The problem was that everyone was expecting and looking for something too complex.

Hull’s audience would expect a singular and complex trick.  Instead, Hull would start by doing a relatively simple and common card presentation trick (call it a Type A trick, perhaps a false cut).  His professional audience would recognize that possibility and seek to test it and thus asked Hull to do it again.  He would, but this time he’d do a Type B – but still common – card presentation trick (perhaps a palm), making it obvious he wasn’t using a false cut.  The experts would thus recognize it wasn’t Type A and would consider Type B.  They would test that hypothesis on the next viewing but, this time, Hull would use a Type C trick while making it clear he wasn’t palming. And so it would go for as many kinds of tricks as Hull knew before he would circle back around again, always at least one step ahead of the posse, because the experts thought they had already ruled out the earlier types of tricks.

Hull’s expert audience was fooled into thinking they were seeing a singular but complex (and heretofore unknown) trick. Notice that the trick was called “The Tuned Deck.”  Instead, they got a series of simple tricks but in a relatively random order.  They were expecting uniformity and complexity.  They wanted complexity.  They wanted new and different.  What they got was repeated but adaptive simplicity.

Of course, the right answer really was simple.  But it wasn’t simplistic.  The trick was set up beautifully and the multiple but simple (to the initiated) tricks were rolled out randomly so as to confuse the experts (a routine audience would likely have been fooled by constant repetitions of Type A tricks). Per Einstein, the trick was as simple as It could be but no simpler.

That’s significant because, in a fascinating paradox, we also love the simplistic as well as the complex.  We want sure-thing formulae.  We want black-and-white.  We don’t want the hassle of fine distinctions and careful analysis. We want to think that we can tune the markets.

Markets are binary.  They can only move up or down.  That makes it seem as though it ought to be simple.  We even talk that way.  The market rallied today due to positive earnings releases.  But markets are actually moved by the interrelationships of an infinite number of variables.  We tend to want to focus on one big thing – e.g., the Fed, trading sentiment, or the political landscape – and to concoct if/then scenarios in response.  We want a tuned market.

Unfortunately, markets are anything but tuned.  They exhibit the kinds of behaviors that might be predicted by chaos theory — dynamic, non-linear, sensitive to initial conditions.  Even a tiny difference in initial conditions or an infinitesimal change to current, seemingly stable conditions, can result in monumentally different results.  Thus markets respond like systems ordered along the lines of self-organizing criticality – unstable, fragile and largely unpredictable – at the border of stability and chaos.  As shown below, a single grain of sand dropped on a big sandpile can (but won’t predictably or necessarily) cause a catastrophic avalanche.

Accordingly, an overly simplistic analysis – guided perhaps by a singular variable – is a recipe for disaster. Complex solutions don’t offer a lot more, but cost a lot more.  The best we can hope for is to create and test an appropriately probabilistic outlook, recognize its limitations, and act accordingly.

Unfortunately, doing so is far easier said than done.  Our inherent biases and perceptual difficulties make our success rates all too low.  Our lack of sufficient knowledge (we can’t begin to know all the relevant information) can doom us from the start.  And (per Mark Twain) what we think we know that just ain’t so makes matters far worse.

Clinical psychology is dealing with similar issues by trying to decide whether “What has happened to you?” is an appropriate alternative to “What is wrong with you?” for diagnostic purposes.  The potential for narrative fallacy problems is both enormous and obvious, especially since it is so difficult – often impossible – to ascertain causation with any degree of certainty.  Sound familiar?

11 thoughts on “The Tuned Market”